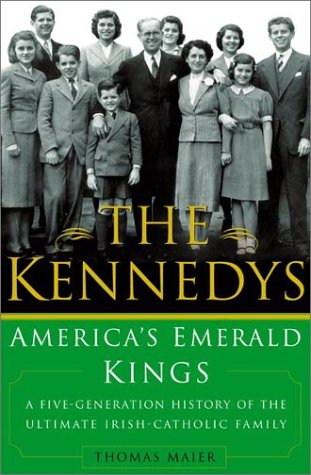 With Doris Kearns Goodwin's out of favor and discredited by charges of plagiarism, the door is open and the time is right for another serious, multigenerational history of America's most fabled clan. reporter Maier () answers the need quite well with this fascinating account, which emphasizes the family's roots as Catholics and products of the Irish diaspora. Unlike Ed Klein's provocative , this thoughtful study does not dwell on the sensational. Maier goes to the heart of the Kennedys' spiritual and tribal identity in order to define and explain a range of subplots within the family saga. For example, one sees Ambassador Joseph P. Kennedy's appeasement of the Nazis and his general insensitivity to the plight of Europe's Jews during the late 1930s in fuller colors than before when one realizes the context in which he operated and the tradition out of which he sprang, rich with ancient, profound and unapologetic anti-Semitism. (JPK also clung to the traditional Irish-Catholic bias against Great Britain.) Maier likewise supplies a masterful account of the culture and habits related to Boston's distinctly Irish-Catholic ward politics, first experienced by young JFK in 1946. And he goes on to explore conservative Catholic anger over JFK's moves to "appease"—in the opinion of the Jesuit magazine —anti-Catholic bigots during the 1960 election. This is all very fertile ground seeded, to a great extent, with items quite rare in recent Kennedy scholarship: new information mingled with genuine insight. It's an admirable job overall. 32 pages of photos not seen by