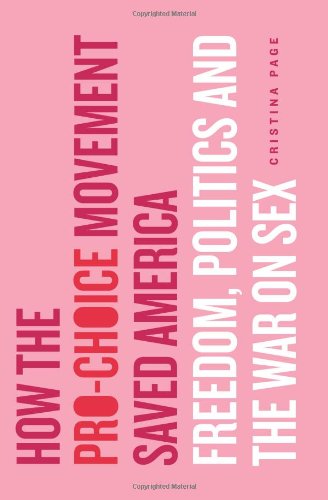 How the Pro-Choice Movement Saved America: Freedom, Politics, and the War on Sex

The abortion issue is a cover for a fundamentalist "anti-contraception" and "anti-sex movement," argues this vigorous broadside. In a well-researched and pointed critique of prolife excesses, NARAL official Page ( ) details the multifaceted opposition the Christian right has mounted to a broad range of reproductive rights. Prolife groups, she notes, have fraudulently conflated contraceptives with devices or substances that cause abortion, championed pharmacists who refuse to sell contraceptives, and organized to block over-the-counter sale of "Plan B" emergency contraceptive pills. Attacking both feminism and premarital sex, she contends, they vilify working moms and push ineffective abstinence-only sex-ed curricula, and have even opposed a vaccine against the HPV virus, a major cause of cervical cancer, claiming it would promote promiscuity. The irony, she argues, is that prolifers' effort to restrict access to contraception actually increases the number of abortions. Against what she believes is the fundamentalists' dour procreationist ideology and animus toward sexual pleasure itself, Page celebrates the blessings conferred by contraceptives in liberating women, and their families, in our modern "pro-choice world," claiming that "regular sex brings people as much happiness as a $50,000-a-year raise." If sometimes a tad facile, her defense of the sexual revolution in upbeat—even patriotic—terms makes this a spirited, thought-provoking addition to the culture wars.