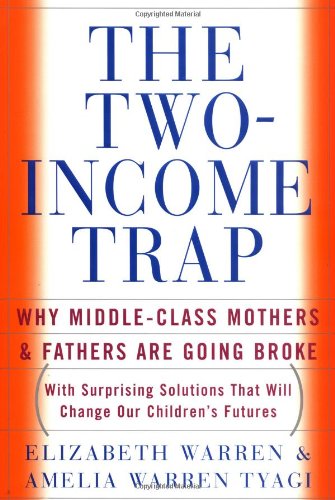 THE TWO-INCOME TRAP: Why Middle-Class Mothers and Fathers Are Going Broke

Warren, a law professor at Harvard () and her daughter Tyagi, a former McKinsey consultant, have joined forces here to argue here that the two-parent middle-class working family is on the brink of financial disaster. The number of families declaring bankruptcy or receiving a foreclosure against their house has shot up dramatically. Presenting carefully researched economic data to support their arguments, the authors contend that, contrary to popular myth, families aren't in trouble because they're squandering their second income on luxuries. On the contrary, both incomes are almost entirely committed to necessities, such as home and car payments, health insurance and children's education costs. When an unforeseen event such as serious illness, job loss or divorce occurs, families have no discretionary income to fall back on. The authors recommend a number of useful societal solutions to get families out of this trap, such as legally prohibiting credit card companies from charging grossly unfair interest rates and exposing banks that employ a loan-to-own strategy that steers minority customers to higher mortgage rates with an eye to future foreclosures. Warren and Tyagi point out that families buy homes they cannot afford in order to live in a neighborhood with better schools. Their proposed solution, however—to institute a public school voucher system with wider choice—is less carefully thought out. Overall, however, this is a needed examination of an emerging social problem.