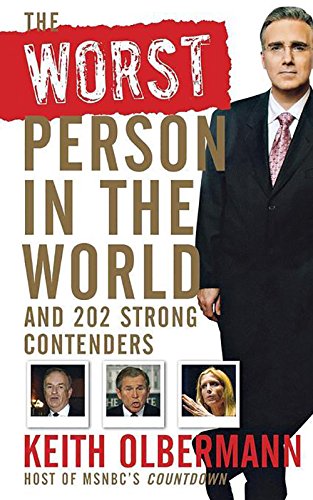 The Worst Person in the World: And 202 Strong Contenders

For his first book as a newsman, the smart, sarcastic host of MSNBC's nightly newsmagazine program Countdown with Keith Olbermann has compiled nearly one years' worth of his wickedly righteous Worst Person in the World feature. Of course, when he says ""worst,"" Olbermann isn't talking about Hitler; these specimens-including Tom Cruise, OJ Simpson and Ann Coulter-are ""the mortal enemies of honesty and dignity, of selflessness and class."" Though the peppery host often pillories the merely stupid or ridiculous behavior of regular Americans and celebrities, the recurring theme is corporate, political and media malfeasance of every stripe. FEMA, the Department of Homeland Security, school boards around the country, Rush Limbaugh and George Bush all make multiple appearances. But the real star of the book-not counting Olbermann himself-is his ratings rival Bill O'Reilly (their shows air at the same time), who gets taken to task again and again. Depending on your politics, you're either going to love or hate the fierce, progressive Olbermann, and his printed rants aren't nearly as cathartic as they are when delivered in his confident, mocking boom, but this collection makes a fine book for flipping.
close
Details