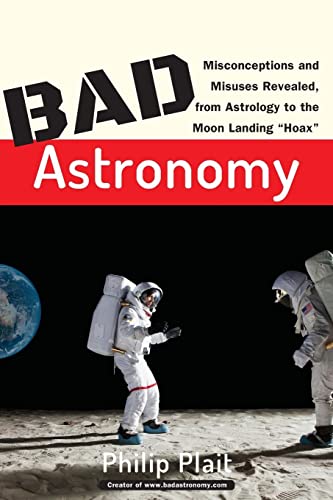 BAD ASTRONOMY: Misconceptions and Misuses Revealed, from Astrology to the Moon Landing "Hoax"

Plait, a science writer who works in the physics and astronomy department at Sonoma State University, is appalled that millions of Americans don't believe the moon landing really took place—and believe that Galileo went blind from looking at the sun, or that they can make an egg stand on end only on the vernal equinox. To set the record straight, he debunks these and many other astronomy-related urban legends in this knowledgeable, lighthearted volume. The early chapter "Idiom's Delight" sets the stage by clearing up the scientific inaccuracies in everyday expressions—as in the phrase "light years ahead," for example, which is used to indicate timeliness or prescience when light years are actually a unit of distance. In later chapters, Plait explains meteors, eclipses, UFOs, and the big bang theory, revealing much about the basic principles of astronomy while clearing up fallacies. With avuncular humor, he points out the ways advertising and media reinforce bad science and pleads for more accuracy in Hollywood story lines and special effects. This book is the first in Wiley's Bad Science series on scientific misconceptions (future titles will focus on biology, weather and the earth).