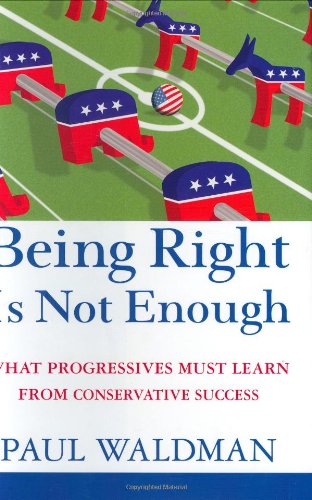 Being Right Is Not Enough: What Progressives Must Learn from Conservative Success

A senior fellow at Media Matters for America and the former associate director of the Annenberg Public Policy Center, Waldman briefly indulges in matter-of-fact self-blame while lauding the Right for its hard work and cheering on future Democratic activism in this well-sourced, partisan blueprint for undoing Republican control of the nation. Let's "inaugurate the age of the progressive warrior," Waldman ( ) trumpets, proposing that Democrats take a cue from their opponents in order to do so. He maps out a rhetorical strategy, a "thematically unified master narrative" in answer to the "four pillars of conservatism": low taxes, small government, strong defense and traditional social values. "We're all in it together" is Waldman's progressive answer, a maxim that encompasses five principles: "government that works for everyone, opportunity for everyone, security for everyone, individual freedom for everyone, progress for everyone." Under each principle one can fit any topical issue (e.g., corporate accountability), Waldman explains. He details more grounded, if less conventional, strategies as well: attract moderate voters to the Democratic Party by attacking moderate Republican politicians instead of radical conservatives, and focus on the Southwest instead of the South. Daunted progressives may take heart in Waldman's pragmatic if untested ideas.