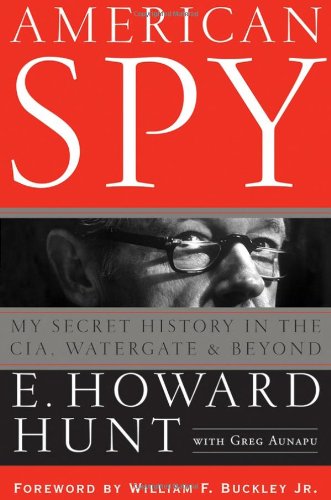 American Spy: My Secret History in the CIA, Watergate and Beyond

Career spy, Watergate conspirator and prolific suspense novelist Hunt ( ) collaborated with journalist Aunapu ( ) on this breezy, unrepentant memoir. Hunt (who died recently at 88) recalls the highlights of a long career, from WWII service with the fabled Office of Strategic Services (OSS)—predecessor of the CIA—to a career with the agency itself and a stint as a consultant to the Nixon White House. As a White House operative, Hunt specialized in dirty tricks and break-ins—including the Democratic National Committee's headquarters—and served 33 months in federal prison for his role in the Watergate scandal. He claims to have been a magnet for women, especially models, and shamelessly drops the names of the rich and powerful. He also played a key role in the disastrous Bay of Pigs operation. As for his role in Watergate, he blames his "bulldog loyalty" and concedes only that he and his fellow conspirators did "the wrong things for the right reasons." In a postscript, Hunt urges reforming the beleaguered CIA in the image of the wartime OSS and its "daring amateurs." Hunt's nostalgic memoir breaks scant new ground in an already crowded field.