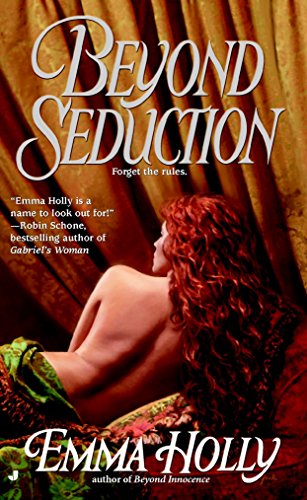 The latest offering from the author of and the Black Lace erotica series is a Regency-era romance in name only; Holly brings a level of sensuality to her storytelling that may shock the uninitiated. Daughter to the Duke of Monmouth, Merry Vance would be quite a catch for any suitor, but Merry has no interest in marriage. When her mother finally issues an ultimatum, Merry decides to make herself an ineligible candidate for matrimony by ruining herself with the help of painter Nicolas Craven. Merry agrees to pose nude for Nicolas, but she hasn't gambled on the intense attraction she feels for him. Fans of Robin Schone and Thea Devine will adore the steamy love scenes here, which go beyond the usual set pieces to include more intense sex play. However, the story isn't simply about sex; the relationships between parent and child are fascinating here and are explored in several permutations. Most surprising is Merry's lack of connection to her mother, a departure from the usual abstracted fondness of Regency-era parents. Nicolas must undergo his own struggles before he can come into his own, which include learning to be a parent. Readers looking for a light, playful Regency should look elsewhere, but fans of bolder romances will relish this potent combination of heady sexuality and intriguing characterization.