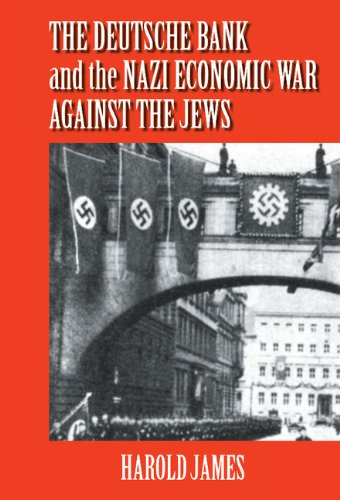 THE DEUTSCHE BANK AND THE NAZI ECONOMIC WAR AGAINST THE JEWS

In a book that could be subtitled "Hitler's Willing Investment Bankers," Princeton historian James recounts the Deutsche Bank's participation in the "aryanization" of the German economy from 1932 to 1940, drawing on internal Deutsche Bank records that only recently became available as well as material seized by Soviet troops after World War II. He shows how, as the Nazis began to rise to power, the bank reluctantly purged itself of Jewish directors, followed by Jewish employees, in response to state pressure. Later, James reveals, the regime enlisted the bank employees' professional skills, domestic and foreign relationships, and financial muscle to eliminate Jewish control and ownership of German companies. The expropriation was conducted gradually, since many hastily seized companies proved worthless without the management of their Jewish former owners, and also because this method muted foreign criticism and preserved a veneer of legality. This stands in stark contrast to the brutally simple methods used by the Nazis in occupied countries and, after 1941, in Germany as well, explains James. While he finds it impossible to make an accurate estimate of the profit Deutsche Bank made from these activities and whether that profit might exceed postwar reparations, he suggests that extravagant figures cited by other researchers are baseless and implausible. His work will not carry weight with these critics, however, since it was subsidized by Deutsche Bank and is largely based on documents kept under their control for the last 50 years.