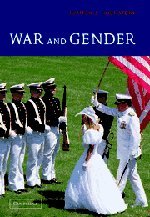 WAR AND GENDER: How Gender Shapes the War System and Vice Versa

The war between the sexes is not so different from war itself, according to this provocative and disturbing study of how gender is inextricably embedded into human conceptions of war and aggression. Pointing to consistent, cross-cultural gender arrangements throughout history—most fighting soldiers have been male; patriarchies have traditionally used the ideal of the vulnerable female to encourage male violence during war—Goldstein () has amassed a huge array of research, literature and anecdote in this comprehensive, cohesive overview of dozens of subtopics, from myths of Amazon warriors to changes in the design and marketing of GI Joe dolls over the decades. He astutely evaluates studies of the effects of childhood sex segregation, drawing disconcerting conclusions that it prepares and preconditions children for adult wartime behavior. His analysis of female military imagery and women's frequent participation in revolutionary movements is imaginative and convincing: "The image of a woman holding a rifle and a baby is found in liberation movements across the third world." At times it seems like Goldstein, professor of international relations at the American University in Washington, D.C., has bitten off more than anyone could chew in a single volume. His inquiry into wartime rape and the feminization of the male enemy relies too heavily on Richard C. Trexler's fascinating but flawed , and his worthwhile critical use of Lionel Tiger's classic falls short of grappling with the book's problems. But overall, he has produced a remarkable compendium of information and analysis that moves toward a vital, ongoing cultural discussion. Photos and illus.