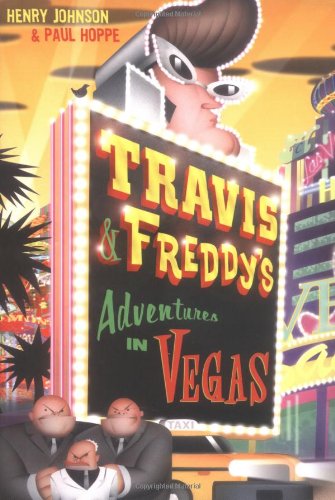 As befits its setting, this humorously trumped-up, larger-than-life romp features a colorful array of wheeler-dealers—including the two nearly-13-year-old protagonists. "Easy-on-the-eyes guy" Travis can "talk his way into, or out of, anything"—even if he's hopeless in math class. Horse-faced, buck-toothed Freddy has no athletic prowess and no social skills, but this computer geek excels at math and helps Travis ace a math test for the first time. Each boy puts his special skills to use after they learn that Travis's gambling father is facing financial ruin. Beating the odds, they manage to board a plane and land a suite in Las Vegas, where they hope to win enough money to bail the man out. In a madcap series of events, the duo enlists the aid of Sam, a gutsy female cab driver whose father is in jail after being set up by Vegas's leading gangster. With Travis by his side, Freddy uses his "monster iBrain mega-laptop" to mastermind a big win for Sam at the blackjack table, but the gangster finds them out. The tone is frivolous enough that readers won't worry for the youngsters' safety—even as the villain hangs them upside-down in their tighty-whitey underpants off a balcony high above the strip. Though their emergence as heroes on both the Vegas and home fronts comes as no surprise, there are enough silly yucks along the way to keep kids amused—and betting on the duo. Ages 10-up.