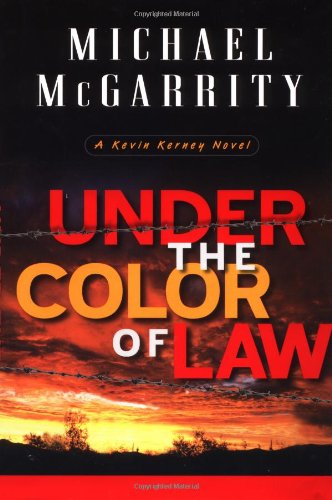 UNDER THE COLOR OF LAW: A Kevin Kerney Novel

Popular cop Kevin Kerney acquires new depth and substance in this sixth installment in McGarrity's solid series. In his previous job as deputy chief of the state police, Kerney killed a cop gone bad. Now he is settling into his new job as police chief of Santa Fe, N.Mex., and his new subordinates are of two minds whether they should trust him or not. They have ample opportunity to observe him in action, because as the book opens, Phyllis Terrell, the estranged wife of an ambassador and ex-military honcho, is found stabbed to death in the kitchen of her hilltop mansion, and Father Joseph Mitchell, an ex-soldier turned priest researching the government's covert operations, turns up dead in the Christian Brothers Residence at the College of Santa Fe. The police investigation has barely begun before evil Feds, who dismiss Kerney as merely "an over-the-hill lightweight cop who occasionally got lucky," move in and start sanitizing the crime scenes. The chief keeps digging on the sly, of course, as every possible witness ends up dead. McGarrity (; ; etc.) writes well, with chapters that march the reader along, and is very convincing on procedural matters—his credentials include a stint as deputy sheriff for Santa Fe County. Unfortunately, when he moves into action movie territory, the material does not seem natural for him, and in particular the main antagonist—a human killing machine—never comes off as anything more than an image taken from film. The strengths of this book are in the quiet moments, the procedural detail, the local scene and Kerney's reflections on his history and his future.