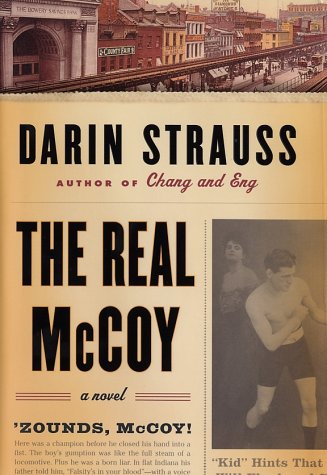 Strauss follows a brilliant debut novel () with more fictive doctoring of history in this daring, unique reenactment of the life of reed-thin, "bone-weary" Virgil Selby, who came to be known as Kid McCoy: a talented turn-of-the-century boxer, professional "flimflammer" and bigamist. The book opens with a bogus charity benefit exhibition boxing match on the first night of the new millennium (1900) as Kid McCoy fights and defeats welterweight champ Tommy Ryan, garnering the crown for himself. The narrative backtracks several years as McCoy, a young runaway still developing his boxing form, meets Johnnie Gold, a philosophical Chinese grifter who initiates McCoy into a life of swindling and deceit, peddling snake oil remedies and betting on fixed horse races. Lonely at times, McCoy settles on a timid department store clerk, and though he's not in love, he marries her, if only to "test his new powers of flimflam." When he moves to Manhattan, vaudeville actress Susan Fields catches his eye and they quickly marry, just in time for a spectacular rematch with Tommy Ryan—which is set up for McCoy to win but backfires, sending McCoy into a depression compounded by an unexpected visit from his father. Several championship fights, another marriage and a cinematic jewel heist later, McCoy emerges as the defeated narrator of his own madcap tale. Apart from the book's awkwardly shifting time line (a device that too often steals McCoy's thunder), this book is well written, comprehensively researched, and stylish, sure to score at the cash register. The big question on fans' lips: Whom will Strauss consecrate next?