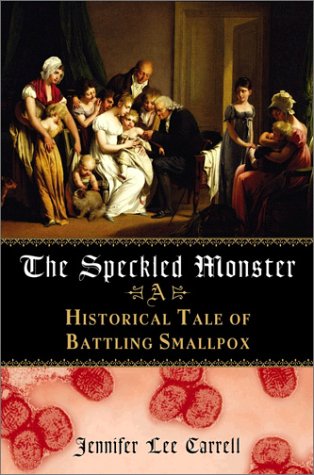 THE SPECKLED MONSTER: A Historical Tale of Battling Smallpox

Long before vaccination for smallpox was developed in Europe in the 1790s, people in the Middle East, the Caucasus and Africa knew that small amounts of live smallpox virus injected under the skin would induce a mild form of the disease that rendered a person immune from full-blown smallpox. In her intriguing book, Carrell, a writer for magazine, switches between the stories of two courageous people in early 18th-century England and America who believed passionately in this procedure, called variolation. While living in Turkey, Lady Mary Wortley Montagu, herself disfigured by the disease, had her son inoculated. When she convinced her physician to inoculate her daughter during a smallpox epidemic in London in 1721, public opinion was vehemently against her but, after the procedure appeared to work, physicians persuaded King George I to let them experiment on prisoners who agreed to submit to variolation in return for pardons. In Boston, also ravaged by smallpox in 1721, Zabdiel Boylston, a physician who had survived the disease, learned of variolation from slaves and successfully inoculated his own children. The authorities ordered Boylston to stop the practice, and outraged citizens even tried to kill him, but he persisted, encouraged by a few believers, including the influential Puritan clergyman Cotton Mather. In Boston, as in London, most people who underwent the procedure didn't get full-blown cases of smallpox, and variolation was finally accepted as the only way to protect against the disease before vaccination with cowpox, a benign virus, was developed in the 1790s. Carrell's novelistic treatment of this story, which concludes with an account of the friendship that developed between Lady Mary and Boylston when he visited London in 1725, is engaging in spite of an overabundance of fabricated conversations and scenes that slow the action.