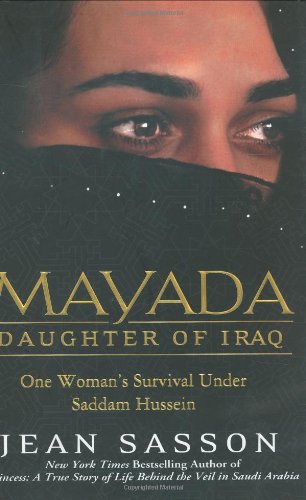 MAYADA, DAUGHTER OF IRAQ: One Woman's Survival Under Saddam Hussein

When author Sasson (; ; etc.) was assigned Mayada Al-Askari as a translator on a 1998 trip to Baghdad, she had no idea she would form a lasting friendship with this fluent English-speaker and member of a prominent Iraqi family. When Sasson returned to the United States, the two women wrote letters and telephoned each other weekly until, in 1999, Mayada was arrested by Saddam Hussein's secret police for allegedly printing anti-regime pamphlets in her Baghdad print shop and imprisoned for nearly a month in Iraq's brutal Baladiyat Prison. Sasson's candid, straightforward account of Mayada's time among the 17 "shadow women" crammed into Cell 52 gives readers a glimpse of the cruelty and hardship endured by generations of Iraqis. Mayada stares down this ugliness as soon as she's yanked from her meticulously run shop into the prison's interrogation room: "She saw chairs with bindings, tables stacked high with various instruments of torture.... But the most frightening pieces of... equipment were the various hooks that dangled from the ceiling. When Mayada glanced to the floor beneath those hooks, she saw splashes of fresh blood, which she supposed were left over from the torture sessions she had heard during the night." Sasson's graceful handling of such stomach-turning material, including an overview of Iraq's political and social turmoil, is a tribute to her friend, who escaped to Jordan with her children soon after her release from prison. Although Mayada's story has a happy ending, the unclear fates of her cell mates serve as a painful reminder of how many innocent lives were cut short by Hussein's regime.