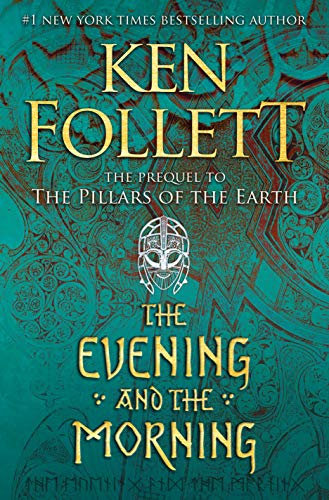 The Evening and the Morning

Follett delivers a lackluster prequel to his Kingsbridge series. The structure will feel familiar to series devotees; it centers on the intertwined stories of three people: a man who is good with his hands, an attractive noblewoman, and a cleric. This time, the action spans 997–1007 CE, and the leads are Edgar, Ragna, and Aldred, whose lives intersect multiple times despite their disparate backgrounds. Edgar, the teenage son of a boatbuilder, is planning to run off with a married woman until a Viking attack on his village in the west of England leaves her dead; that tragedy leads to his family’s move to Dreng’s Ferry, the future Kingsbridge, and to his developing career as a builder. At Dreng’s Ferry, he reunites with Ragna, a Norman woman he’d met years earlier, who has married Wilf, the royal official overseeing the area. Ragna, smart, independent, and beautiful, is trapped in an unfulfilling marriage. The “miraculously handsome” Brother Aldred, a scholar, finds himself confronted with corruption in the church, personified in Wilf’s cartoonishly evil brother, Wynstan, a bishop. The prose is often stilted and overwrought (“This was the funeral of his hopes”), and the plot elements are derivative of Follett’s past work, adding up to an epic full of romance tropes rather than a reimagined time and place. This is only for series completists. (Sept.)
close
Details