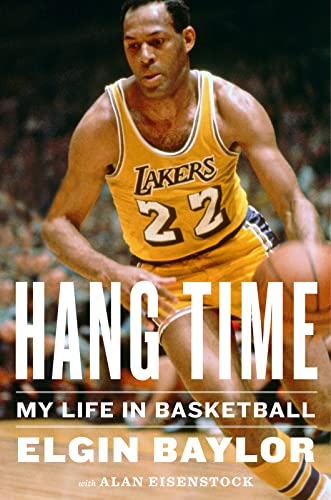 Hang Time: My Life in Basketball

In this sturdy, thoughtful memoir, Los Angeles Lakers legend Baylor digs into his lifelong relationship with basketball. When he was a boy in postwar Washington, D.C., the court served as a refuge from racism and from his perpetually scowling father, “the original angry black man.” The skills Baylor exhibited playing in high school, such as his reverse dunk, took him to the College of Idaho and Seattle University and, in 1958, to the Minneapolis Lakers (which would move to L.A. in 1960). Professional success did not shield him from mistreatment, however. Baylor made headlines for refusing to play a game in Charleston, W.Va., after a hotel denied him and his black teammates rooms because of their race. “I will stage my own private protest,” he said at the time. He was also among the 1964 All-Star Game players who threatened to boycott the game unless all NBA players received better treatment (including a pension plan and a full-time doctor for every team). When his playing career ended, Baylor became the GM of the Los Angeles Clippers. Throughout, Baylor vividly remembers former teammates such as the aloof Wilt Chamberlain (“In our four years on the Lakers together, we never got out to dinner”) and front-office figures, such as Clippers owner Donald Sterling, Baylor’s longtime boss, who comes across as odious in telling Baylor, “I prefer white coaches. Black players are more intimidated by a white coach.” Baylor’s bittersweet and detailed stories will enchant and enlighten hoops fans of all ages. [em](Apr.) [/em]
close
Details