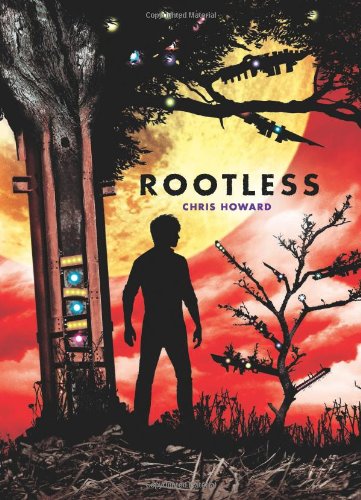 In an impressive debut, first in a planned series, Howard introduces a devastated future devoid of trees, where omnivorous locusts plague the landscape, a ruined climate makes survival difficult, and genetically engineered corn is the only viable crop. Banyan, a teenage artist searching for his missing father, builds trees out of scrap for those aching for a touch of the past. When Banyan stumbles across a map to the rumored last trees on Earth, he and an unlikely group of allies are sucked into a perilous adventure, braving cannibals, poachers, pirates, slavers, and the omnipresent and insidious GenTech corporation. There’s a brilliant madness to this deadly postapocalyptic world, filled with complex characters, shifting loyalties, and layers of mystery. While convoluted and messy, it’s also a nonstop adventure, with wild concepts and an almost hypnotic quality to Banyan’s terse, weather-beaten narration. Lines like “I knew it was a day of endings, one way or another” and “One good thing about a world made of stone and steel, that world can’t burn for long” bring this unforgettable setting to life. Ages 14–up. Agent: Laura Rennert, Andrea Brown Literary Agency. (Nov.)
close
Details