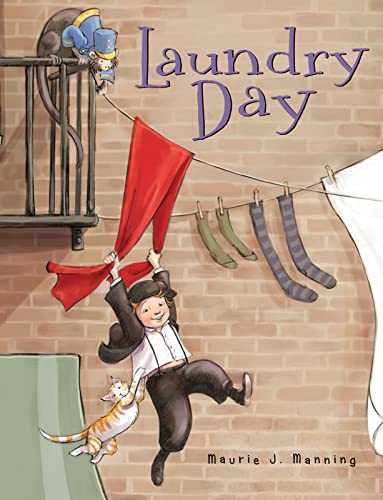 In a vivid, warmhearted picture book that unfolds in graphic novel–style panels, a shoeshine boy living in a 1900s immigrant neighborhood (think New York City’s Lower East Side) unexpectedly finds a bright red scarf. Determined to locate its owner, the boy embarks on a grand tour of the tenements, meeting Chinese, Polish, Italian, Ukrainian, Jamaican, and Yiddish-speaking inhabitants (a short glossary concludes the book), and earning a mooncake, pennies, and even a bowl of matzo ball soup for his efforts. (“Such a good boy, to come all this way,” says Rabbi Shulevitz’s wife.) Manning’s pages are exuberance itself as her hero balletically bounds from frame to frame, leaping onto fire escapes, scrambling up and shimmying down water pipes, and using clotheslines as a tightrope and zip line. Manning (Kitchen Dance) may be stretching history slightly to imagine so many different nationalities inhabiting this environment (the demographics could be more 21st-century than 20th), but what really matters is that at every stop, the shoeshine boy finds that the global village is a welcoming, benevolent place. Ages 4–8. Agent: Scott Treimel, Scott Treimel NY. (Apr.)
close
Details