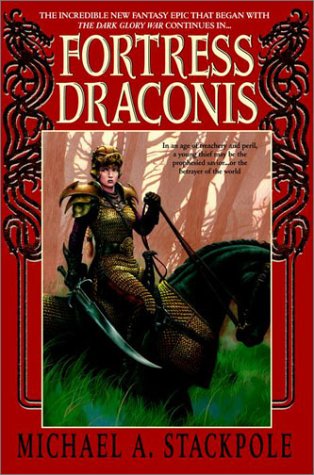 FORTRESS DRACONIS: Book One of the DragonCrown War Cycle

In this first volume in a new epic fantasy series, prolific bestseller Stackpole (The Warrior Trilogy; The Blood of Kerensky Trilogy; eight Star Wars novels; etc.) immediately draws the reader into Yslin—a city in a dark world menaced by a tyrant princess, Chytrine. Like all those subject to her control, Will, a young thief, despises Chytrine. True to fantasy form, Will views his life of crime as merely another profession, as ancient and honorable as that of barber or innkeeper. In fact, his highest ambition is to be placed in a league with "the Azure Spider," his hero. As such, he is surprised to find that destiny has a far greater role for him to play. His theft of a "silver" leaf seems to excite more of a reaction from its original owner than it should. Although it appears to be made of indestructible metal, it holds the suppleness and warmth of a real leaf. Its owner, like the princess Chytrine, is a Vorquelf. Will has been taught a hatred of Vorquelves by the man who took him in—the Fagin-like Marcus. So he's mightily surprised when he's rescued from the leaf's owner by a Vorquelf named Resolute. With Resolute and Crow, a human, as companions, Will eventually finds his way to a blind Vorquelf, who paints the future into the murals of her cave. The coming of the thief, Will the Nimble, has been foretold. But whether he is to be that world's savior or destroyer is unknown even to himself. As usual, Stackpole provides a compelling and engaging escape.