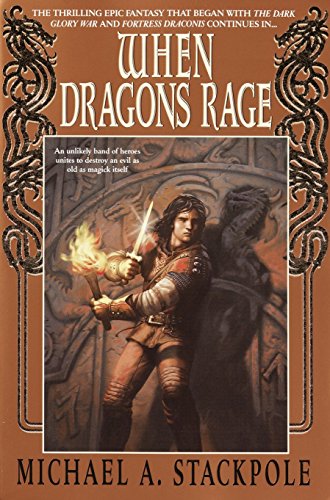 WHEN DRAGONS RAGE: Book Two of the DragonWar Crown Cycle

Communing with dragons has a price in the second book of Stackpole's Tolkienesque epic trilogy (), and no one knows it more than the band of unlikely warriors determined to find the fragments (Truestones) of the DragonCrown. The Truestones would give the Vorquelf Empress Chytrine the potential power to crush the Southlands and eventual dominion over the world. Among those pledged to defeat Chytrine are Princess Alexia (Alyx) and her "husband" Crow (Tarrant Hawkins), whose gentle love story provides a nice subplot alongside the prerequisite battle scenes and magick lessons; Resolute, the loyal exiled Vorquelf; ex–teen thief Will Norrington, whose heroic efforts have been foretold in a prophecy to be the ultimate key to Chytrine's destruction; and young Kerrigan Reese, a shy adept still learning how to harness his own talents. Especially intriguing are the dragons, dracomorphs, wizards and other odd creatures (including the Azure Spider from the last book), whose exploits, along with Will's heroic development, enliven the somewhat sedate pacing of this complex saga. Also of note are the scenery chewing antics of Chytrine's devoted servant , as well as the more elegant musings of Princess Isaura, the conflicted daughter of the Aurolani Empress. It takes a while for the masks to come off in this installment and the dragons to fly, but once they do, the ride is worth the wait.