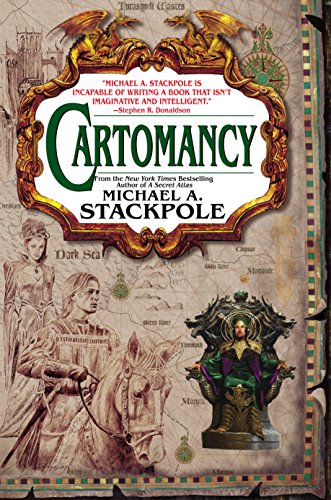 Cartomancy: Book Two of the Age of Discovery

Bestseller Stackpole's second book in his Age of Discovery series (after 2005's ) offers more complex geopolitical intrigue shaped by magic—in particular, the chaotic "wild" magic released more than seven centuries earlier by "the Cataclysm," when the Empress Cyrsa split the realm into "the Nine Principalities." Grandmaster cartographer Qiro Anturasi, despite being the prisoner of Imperial Prince Cyron of Nalenyr, has somehow been able to create a brand new continent in what had hitherto been an unoccupied portion of the ocean. Meanwhile, Qiro's grandson, Kelos, who has been sent to map the wild lands of Ixyll, has been captured by Prince Pyrust of Deseiron, who, like Cyron, schemes to unite and rule the Nine Principalities. A profusion of characters and subplots slows the pace, but there's adventure aplenty for those who like their fantasies big and bloody.