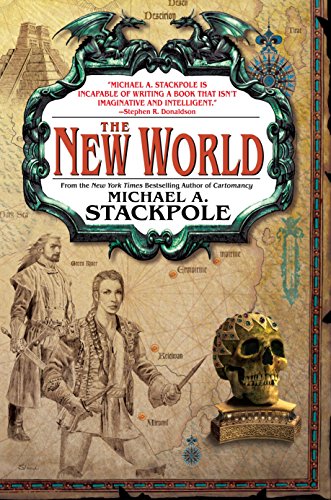 The New World: Book Three of the Age of Discovery

Set in a sprawling realm of scheming deities and heroic mortals, the earth-shaking conclusion to bestseller Stackpole's Age of Discovery trilogy (after and ) focuses on the efforts of the three grandchildren of royal cartographer Qiro Anturasi, a master mapmaker whose unparalleled magical ability allows him to reshape the landscape of reality, to save their world from destruction. Major threats include an undead, soulless prince hell-bent on usurping the crown from his empress stepmother and a vengeance-obsessed elder god determined to undo all of creation. With its huge cast, numerous byzantine subplots and nonstop action, Stackpole's ambitious epic is comparable to—if not quite at the level of—sagas by adventure fantasy heavyweights like George R.R. Martin and Robert Jordan. Considering the story's intricate mix of military, political and supernatural machinations, the overall theme is surprisingly simple and profound: every act of creation, no matter how big or small, is significant, and “life itself is magic.”