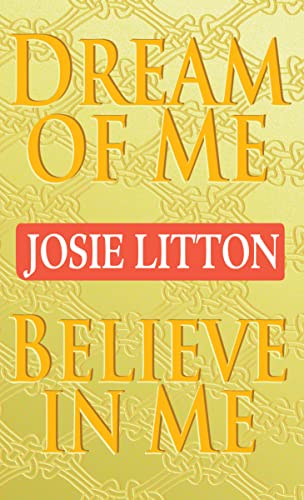 DREAM OF ME and BELIEVE IN ME

Set in England and Norway at the end of the ninth century, this single volume contains the first two installments of Litton's debut trilogy. Through lyrical prose and sharp sensory details, Litton conveys the harshness of an era tempered by the promise of peace and the prospect of love. When fierce Norse chief Wolf Hakonson receives a scathing response to his offer of peace from Hawk, a renowned Saxon lord, and his sister, Cymbra, he kidnaps Cymbra and takes her back to his settlement. Wolf had originally planned to ravage and humiliate her, but her unparalleled beauty and compassionate demeanor lead him to marry her instead. The attraction between the two is immediate and palpable, but their path to marital bliss is beset with obstacles. First, the women of the settlement refuse to accept their Saxon mistress, who turns out to have empathic abilities, and then Wolf must face the wrath of his brother-in-law. Inevitably, true love triumphs, but the peace forged by their fortuitous union is precarious. To cement the pact between the Saxon and Norse, Hawk grudgingly agrees to take a Norse bride, and his unexpected affection for Lady Krysta, his enigmatic and fiery fiancée, is the focus of Litton's second, less dynamic entry. Although Hawk's sinister half-sister, along with a number of other scheming figures, try to drive a wedge between the couple, the story lacks the romantic tension that distinguishes the author's first installment. Nevertheless, Hawk and Krysta are charismatic characters, and Krysta's guardians—a wily troll and an austere woman aptly named Raven—add humor and a dash of magic to the mix. Historical romance readers will embrace this capable author and her enchanting new trilogy.