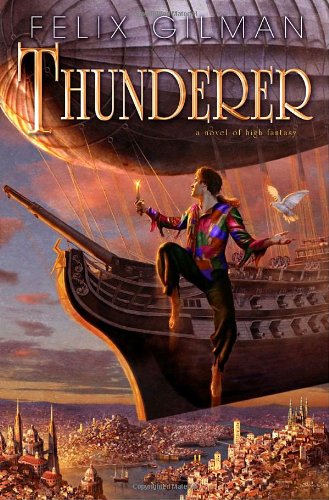 Scattershot plotting and puzzling theology notwithstanding, there’s much to like in Gilman’s first novel, fantasy set in the ever-shifting city of Ararat. Once a gifted composer in the distant city of Gad, Arjun has come to Ararat seeking the intangible Voice. Instead, he finds a city filled with other gods, streets that resist being mapped and citizens touched in varying ways by the passing of the mysterious Bird. Gilman’s literary antecedents are intriguingly diverse. Ararat itself fuses elements of Renaissance Venice and Victor Hugo’s Paris. Arjun’s search leads at times into gaslight-era SF à la Jules Verne, at others into distinctly Poe-like horror, while a secondary plot transforms street youth Jack into a hybrid of Peter Pan and Dickens’s Artful Dodger. Impressively, the whole remains essentially coherent, though just how and why Ararat’s gods behave as they do is unclear, and parts of the convoluted climax rely too heavily on underexplained aspects of the city’s nature. Nonetheless, strongly conveyed atmosphere and intriguing characters make this a distinctive debut.