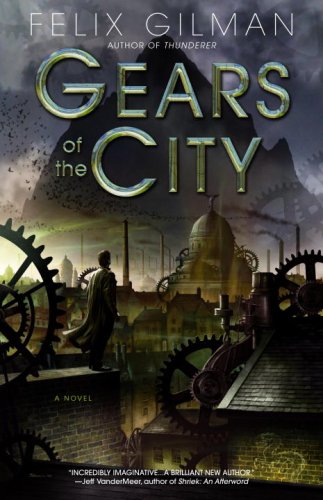 Gears of the City

In Gilman's alternately fascinating and frustrating sequel to 2007's , the time-walking musician Arjun has gone mad after trying to climb the mysterious mountain at the center of the city of Ararat. The city itself—easily the novel's most fascinating character—has entered a dark age. Gods no longer wander among the people, men go to work in dreary factories and secret policemen called Know-Nothings patrol the streets. As a wounded Arjun flees the mysterious Hollow Servants, he encounters a variety of odd characters who join his quest to explore the mountain. Gilman's world-building is intricate, but his plotting often falters and the denouement is a mess. The multiple viewpoints bog down the storytelling, and though there's still much to enjoy in exploring the city, it's not enough to save the book as a whole.