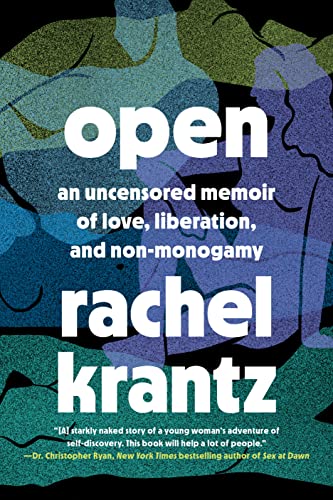 Open: An Uncensored Memoir of Love, Liberation, and Non-monogamy

In this evocative debut, Krantz, founding editor of Bustle, chronicles how an open relationship changed her life. Fresh from a breakup in 2015, she met Adam, an academic studying “the psychology of romantic and sexual desire—specifically, the importance of triangulation.” After their second date, he confessed he was seeking a life partner, but ultimately wanted an arrangement where neither partner was restricted. Eager to explore her sexuality, Krantz accepted and was promptly whisked into what she recounts was at first an idyllic relationship, a phase commonly referred to by psychologists as “lovebombing.” In titillating detail, Krantz chronicles the sex parties, “Dom/sub relationships,” and MFM (Male-Female-Male) threesomes her and Adam participated in. “Nothing was off limits: dates, arguments, role playing, trips to swingers’ resorts,” she writes. Eventually, though, manipulative tendencies from both partners came to the fore. Krantz sweeps readers into a narrative that seduces and educates in equal measure, but it can be difficult to parse her vulnerability from artifice, especially upon learning that Krantz “obsessively documented” her relationships and made audio recordings of “hours and hours, days and days” of sexual encounters after being approached to write this book. Nonetheless, this offers an alluring and insightful look at a life lived outside of conventional structures. Agent: Peter McGuigan, Foundry Literary. (Jan.)
close
Details