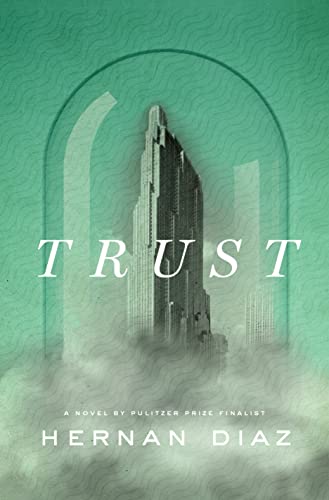 Diaz returns after his Pulitzer finalist In the Distance with a wondrous portrait in four texts of devious financier Andrew Bevel, who survives the Wall Street crash of 1929 and becomes one of New York City’s chief financial barons before dying a decade later at age 62. First there is Bonds, a novel by controversial writer Harold Vanner, which tells the story of Benjamin Rask, a character clearly based on Bevel. The novel, published shortly before Bevel’s death, infuriates the magnate, particularly for its depiction of Bevel’s deceased wife, Mildred, as a fragile madwoman. Bevel responds by undertaking a memoir, which only serves to highlight his own touchiness and lack of imagination. The third story-within-the-story is the most significant; in it, the reader meets Ida Partenza, daughter of an Italian anarchist in exile, who, in pursuit of her own writerly ambitions, suppresses both her own conscience and the suspicions of her suitor, Jack, to become Bevel’s secretary and coconspirator in ruining Harold Vanner, as Ida concocts a counternarrative of a saintly Mildred. The reader eventually hears from Mildred directly via her journal, discovered by Ida during her research and included as a coda. The result is a kaleidoscope of capitalism run amok in the early 20th century, which also manages to deliver a biography of its irascible antihero and the many lives he disfigures during his rise to the cream of the city’s crop. Grounded in history and formally ambitious, this succeeds on all fronts. Once again, Diaz makes the most of his formidable gifts. (May)
close
Details