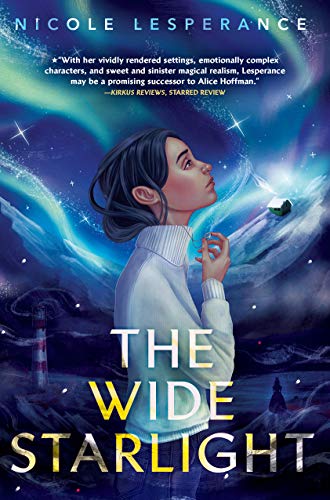 Lesperance gusts through parental loss, Norwegian folktales, and one’s perception of others in this mourning-laced magical realist debut. Ten years prior to the start of the book, Eline’s mother Silje—who raised Eline on stories and an unpredictable winter magic they shared—called down the Northern Lights and disappeared, abandoning Eline near their icy Svalbard hometown, “a tiny archipelago halfway between Norway and the North Pole.” Now, Eline, 16 and living with her marine biologist father on Cape Cod, finds a mysterious letter asking her to call Silje down from the sky. But Silje’s emotionally fraught return warps reality: meteorites fall, narwhals strand in the harbor, and three strange, cloaked girls haunt Eline’s footsteps. When Silje disappears again to right things, Eline follows her back to arctic Svalbard—and must face Silje’s mythic creatures, the complex truth of her family, and her lifelong grief. Though Lesperance gestures at rich subjects, including losing a bicultural Norwegian American heritage, the impact of unhappy childhoods, and understanding others’ flaws, the themes’ development and interconnection suffers amid frenetic, genre-bending pacing. Even so, this uneven but promising debut is clear-eyed on the intricacies of family. Ages 12–up. [em]Agent: Kathleen Rushall, Andrea Brown Literary. (Feb.) [/em]
close
Details