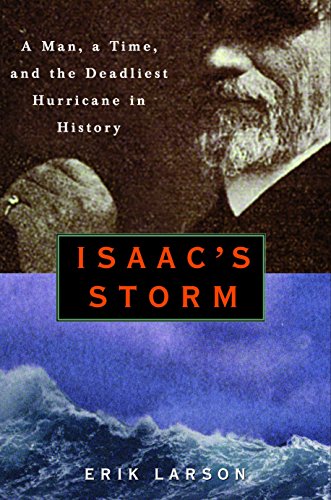 Isaac's Storm: A Man, a Time, and the Deadliest Hurricane in History

Torqued by drama and taut with suspense, this absorbing narrative of the 1900 hurricane that inundated Galveston, Tex., conveys the sudden, cruel power of the deadliest natural disaster in American history. Told largely from the perspective of Isaac Cline, the senior U.S. Weather Bureau official in Galveston at the time, the story considers an era when ""the hubris of men led them to believe they could disregard even nature itself."" As barometers plummet and wind gauges are plucked from their moorings, Larson (Lethal Passage) cuts cinematically from the eerie ""eyewall"" of the hurricane to the mundane hubbub of a lunchroom moments before it capitulates to the arriving winds, from the neat pirouette of Cline's house amid rising waters to the bridge of the steamship Pensacola, tossed like flotsam on the roiling seas. Most intriguingly, Larson details the mistakes that led bureau officials to dismiss warnings about the storm, which killed over 6000 and destroyed a third of the island city. The government's weather forecasting arm registered not only temperature and humidity but also political climate, civic boosterism and even sibling rivalries. America's patronizing stance toward Cuba, for instance, shut down forecasts from Cuban meteorologists, who had accurately predicted the Galveston storm's course and true scale, even as U.S. weather officials issued mollifying bulletins calling for mere rain and high winds. Larson expertly captures the power of the storm itself and the ironic, often catastrophic consequences of the unpredictable intersection of natural force and human choice. Major ad/promo; author tour; simultaneous Random House audio; foreign rights sold in Germany, Holland, Italy, Japan and the U.K. (Sept.)
close
Details