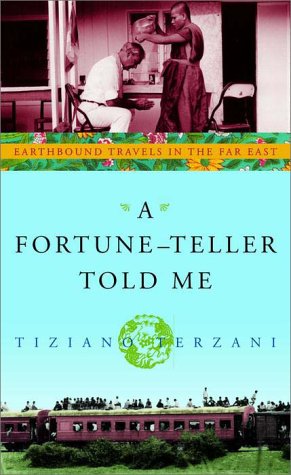 A FORTUNE-TELLER TOLD ME: Earthbound Travels in the Far East

"I was marked for death, and instead I was reborn," declares Italian-born journalist Terzani (;; etc.)—and readers of this vivid memoir will believe it. In 1976, early on in his career as a correspondent in Asia, Terzani was warned by a Hong Kong fortune-teller not to fly in 1993 or he would die. When the fateful year came, Terzani submitted to the warning (no easy decision given all the voyages his work requires), and that year traveled, sometimes with wife Angela in tow, by ship, car, bus and train through 11 countries, including Burma, Laos, Cambodia and Mongolia. Dividing his lucid, graceful and unsentimental prose into 27 anecdotal chapters, Terzani takes readers to the International Thai Association of Astrology, investigates the use of raw garlic and red peppers as a bulwark against the AIDS virus and decries the domestic dog butcherings in Hanoi and constant creeping Westernization throughout the continent, which he encounters and laments in myriad forms. Talking with shamans and soothsayers, Terzani finds the Westernized mind "more limited... a great part of its capacity has been lost. The mind is perhaps the most sophisticated instrument we have, yet we do not give it the attention we give our leg muscles." Terzani's ease and candor and his care for local politics, religion and everyday life make for a full journey of mind, body and spirit.