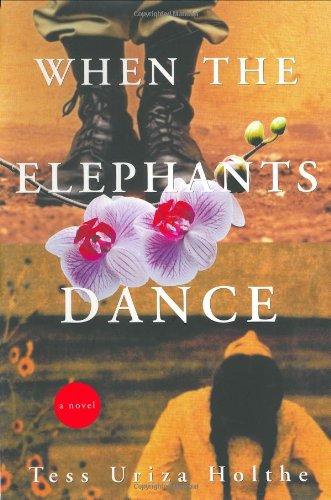 WHEN THE ELEPHANTS DANCE

"Papa explains the war like this," narrates 13-year-old Alejandro as he heads through a series of Japanese barricades and check points. " 'When the elephants dance, the chickens must be careful.' The great beasts, as they circle one another, shaking the trees and trumpeting loudly, are the Amerikanos and the Japanese as they fight. And our Philippine Islands? We are the small chickens." Inspired by her father, who grew up in the Philippines under the Japanese occupation during WWII, first-time novelist Holthe writes about the experience from a variety of civilian perspectives. Set in Manila during the final week of the Japanese-American battle for control of the islands, the novel centers on a small, mismatched group of families and neighbors who huddle in a cellar while Japanese occupiers terrorize and pillage above. Because food and water are scarce, some of the refugees must leave the shelter to forage for sustenance. In simple, strong language, Holthe conveys the terrifying experience of darting bullets and machetes above ground and the equally horrendous experience of waiting for loved ones to return. Grounded in Philippine myth and culture, the novel is filled with beautiful, allegorical stories told by the story's elders, who try to share wisdom and inspire their captive audience in the midst of gruesome violence. Primarily narrated by Alejandro; his older, headstrong sister, Isabelle; and Domingo, a guerrilla commander living a double life—one with his family in the cellar, the other with his true love and adopted son in his rebel army—this beautiful, harsh war story is no epic. Rather, Holthe presents personal, pointed fragments that clearly demonstrate history's cultural and personal fallout.