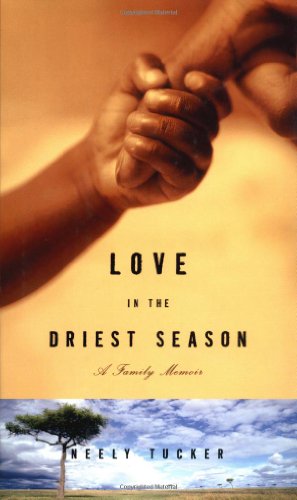 LOVE IN THE DRIEST SEASON: A Family Memoir

As a foreign correspondent, Tucker had worked in conflict zones on two continents and seen death in all its gruesome forms. "The steady stream of violence had worn away my natural sense of compassion to the point where I could cover almost any horror but felt very little about anything at all." Then, in 1997, Neely, a white Mississippian, and his African-American wife, Vita, were posted to Zimbabwe, where the AIDS crisis was feeding an unprecedented wave of sick and abandoned children. "The scale of death, and the depths of misery it entailed, defied the imagination even for someone like me...." Neely and Vita volunteered at an overwhelmed orphanage in the Zimbabwean capital, where diarrhea and pneumonia were killing babies at an alarming rate. Nobody dared whisper the word AIDS, though its specter hung over every crib. Here, Neely and Vita met Chipo, a desperately sick baby girl who had been abandoned under a tree. With temporary permission to take her home, Neely and Vita threw all available resources toward saving her life: round-the-clock feedings, good doctors, medicine and a clean, warm environment. She thrived. Neely and Vita decided to adopt Chipo, only to discover a slew of cultural taboos against adoption by foreigners—a white foreigner in particular. While Chipo grew healthy and fat under their care, the Tuckers negotiated a nightmarish bureaucracy that threatened to tear Chipo away from them; meanwhile, Zimbabwe was entering a period of civil unrest that targeted Americans and journalists. This is a gorgeous mix of family memoir and reportage that traverses the big issues of politics, racism and war.