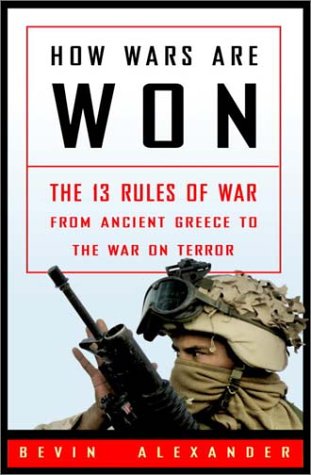 HOW WARS ARE WON: The 13 Rules of War from Ancient Greece to the War on Terror

This is a book whose argument would be more effective had the author not apparently refocused his manuscript after September 11. Alexander, a journalist and writer of general audience works on military subjects, challenges the relevance and effectiveness of the "Western way of war" as articulated by, among others, Victor Davis Hanson and John Keegan. That model emphasizes intense, direct conflict focused on decisive battles whose outcomes are determined by relative loss rates. Alexander's "13 rules," in contrast, emphasize indirection: striking at weak spots, employing deception, paralyzing systems as opposed to killing men. Though the research bases of Alexander's case studies are uniformly thin, he does not seriously abuse his evidence. Most of the battles he cites in demonstration of a particular "rule" more or less support the argument. Cannae, for example, is an appropriate example of a battle of encirclement. Yet Alexander () also seeks to connect his "rules of war" directly to the contemporary "war on terror." In this case, the drastic asymmetries between the adversaries make the relationships to historic battles fought by more similar forces difficult to establish. Alexander usually winds up postulating a connection rather than demonstrating it. The link, for example, between operational-level "cauldron battles" like those fought in Russia in 1941, and the tactics employed by the U.S. in Afghanistan against the Taliban, is at best tenuous, if not entirely inferential. Alexander's case should not be dismissed, but is best approached with intellectual caution. As the U.S. prepares for war, look for interest in this title to be high.