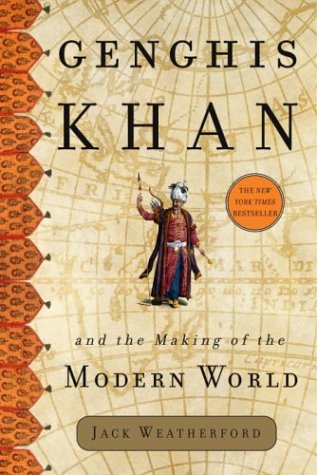 GENGHIS KHAN AND THE MAKING OF THE MODERN WORLD

Apart from its inapt title—Genghis Khan dies rather early on in this account and many of the battles are led by his numerous offspring—this book is a successful account of the century of turmoil brought to the world by a then little-known nation of itinerant hunters. In researching this book, Weatherford ( ), a professor of anthropology at Macalaster College, traveled thousands of miles, many on horseback, tracing Genghis Khan's steps into places unseen by Westerners since the khan's death and employing what he calls an "archeology of movement." Weatherford knows the story of the medieval Mongol conquests is gripping enough not to need superfluous embellishments—the personalities and the wars they waged provide plenty of color and suspense. In just 25 years, in a manner that inspired the blitzkrieg, the Mongols conquered more lands and people than the Romans had in over 400 years. Without pausing for too many digressions, Weatherford's brisk description of the Mongol military campaign and its revolutionary aspects analyzes the rout of imperial China, a siege of Baghdad and the razing of numerous European castles. On a smaller scale, Weatherford also devotes much attention to dismantling our notions of Genghis Khan as a brute. By his telling, the great general was a secular but faithful Christian, a progressive free trader, a regretful failed parent and a loving if polygamous husband. With appreciative descriptions of the sometimes tender tyrant, this chronicle supplies just enough personal and world history to satisfy any reader.