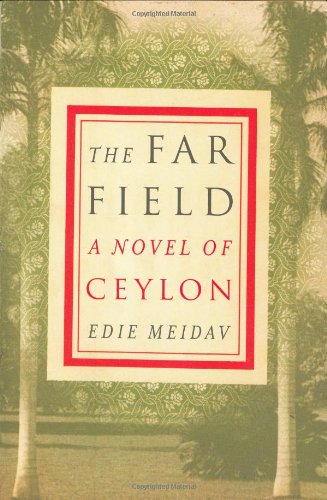 The Far Field: A Novel of Ceylon

Before civil war-torn Sri Lanka became Sri Lanka, it was the British colony of Ceylon, and on this island off the coast of India Meidav focuses the ferocious, prodigious energies of her sprawling debut novel, a work that has been justly compared to the fiction of Ondaatje and Kingsolver. The year is 1936 and Henry Frye Gould leaves behind the spiritualist poseurs of New York society, as well as his wife and child, to go in search of a truly spiritual society. As a self-styled ""anti-missionary,"" he sets sail for the Ceylonese village of Rajottama, his goal to create his own ideal Buddhist world, melding the best of East and West. Among the people who help and hinder Henry in his quixotic quest are Johnny, a charmingly precocious boy and secret British spy who becomes Henry's guide/confidant; his beautiful housekeeper, Nani, a village outcast and the object of Henry's affections; and a ham-eating monk who becomes Henry's mentor in Buddhism. Henry's utopia develops in fits and starts, but when tragedy strikes, things fall apart. The resulting disillusionment is intense, but redemption comes to Henry like a strange and unforeseen gift. In rugged, cadenced prose, Meidav delineates both the inevitability of human solitariness and the longing for the exoticism of the other. As in Peter Matthiessen's At Play in the Fields of the Lord, the novel skewers the cool superiority of the hubristic colonizing mentality. Hailed by the Voice Literary Supplement as one of its ""Writers on the Verge"" in 2000, Meidav succeeds on two levels, illuminating a rarely glimpsed culture and examining the tragic fallout of culture clash. Major ad/promo; author tour. (Apr. 7)
close
Details