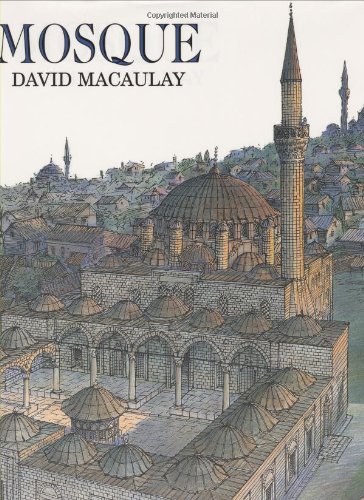 With the level of precision and care that his fans have come to expect, Macaulay (; ) broadens his bookshelf of architectural wonders with this timely new addition, adding color to his palette as well as insight into the Middle East. He whisks readers to the Ottoman empire of the 16th century, where a fictitious admiral prepares to underwrite a new mosque ("The time had come to demonstrate both his faith and his gratitude in the way that had become traditional for a man of his standing"). Macaulay meticulously illuminates the spiritual and architectural considerations in the process of design and construction; he explains the importance of the mosque's alignment upon the kibla ("an imaginary line that points toward and radiates from Mecca"), then examines its structural complexities, such as a "system of piers and arches" to support the building's domed roof. In the process, the mosque's many societal functions emerge; it is actually a complex of buildings consisting of a college for religious education, a kitchen, a public bath, fountain and so on. The monument grows stone by stone through color-washed pen-and-ink illustrations. Full-spread vistas alternate with smaller inset sketches that offer a step-by-step look at brick-making, the crafting of stained glass windows, etc.; readers can practically hear the busy hum of the worksite. Macaulay's wide-ranging perspectives pull onlookers into the thick of the construction, capturing everything from a minaret's-eye view of the activity below to an image of the soaring dome seen from the ground. As always, the level of visual detail is extraordinary; no less so is the explanation of the mosque's role at the center of Muslim social and religious life. All ages.