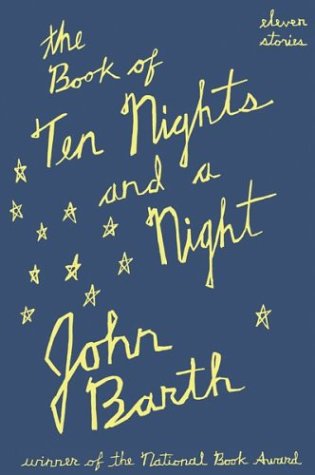 THE BOOK OF TEN NIGHTS AND A NIGHT: Eleven Stories

In Barth's latest collection, one of his stand-ins, C.P. Mason, a writer/teacher who is trying to fit a whole short story around a sentence he remembers from a dream, remarks: "Has any storyteller, from Homer to Hemingway, Poe to Pasternak, attempted to fabricate a narrative something out of so nearly nothing?" Such minimalist flourishes are not what one would expect from the former creator of gargantuan metafictions. Barth calls this collection a Hendecameron, and refers to both (which he pillaged to better effect in ) and the . Instead of the plague from which Boccaccio's narrators have fled, Barth's stories are told over 11 days that include and succeed 9/11. The intervals between stories are filled with a lot of cutesy converse- and asterisk-laden copulation between a Barth stand-in—Graybard—and his muse, Wysiwyg (Barth, one of nature's true acronym maniacs, got the name Wysiwyg from computer slang—it stands for "What you see is what you get"). The stories themselves proliferate with other Barth stand-ins—retired professors who are writers or retired writers who are professors—and smart, sexy, Wysiwygish women. The few bright spots in an otherwise dismal bunch include the first night, a strongly written fragmentary description of the retirement of a Chesapeake Bay boatman, Capt. Claude Morgan, the oldest story here; the 11th night, which is Wysiwyg's story; and an interesting theme story on the universe as a shrinking mass, paralleling the human aging process, "The Big Shrink." The rest are filled with the gaseous, colorless chitchat characteristic of Barth's late style. Distressingly, Barth's inversion of the old writer's adage, "show, don't tell," has led him to a garrulous abyss: he tells and tells, but has nothing to show, leaving the reader with no reason to read him.