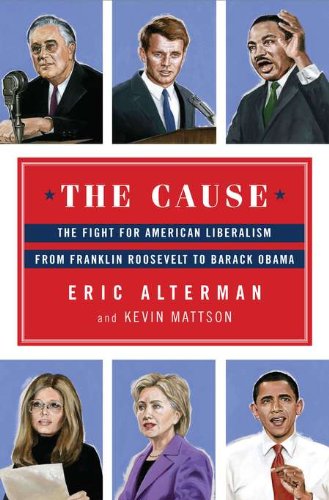 The Cause: The Fight for American Liberalism from Franklin Roosevelt to Barack Obama

In this ambitious work, journalist Alterman (Kabuki Democracy) and historian Mattson (When America Was Great) present an encyclopedic history of liberalism, a movement devoted to equality, justice, and freedom, and a powerful engine of change in the 20th century. With a huge cast ranging from political to cultural figures as diverse as Reinhold Niebuhr, Arthur Schlesinger Jr., Lyndon Johnson, Gloria Steinem, Richard Rorty, Bruce Springsteen, and many, many more, the authors tell the tortured story of the liberal fight for social justice. Against the backdrop of the lives and works of these men and women, they undertake an exhaustive exposition of legislation, election campaigns, foreign policy decisions, theoretical books and journals, and other cultural artifacts. The liberal devotion to rationality leads to the problem of “how to inspire passion for a philosophy that itself distrust[s] passion.” Alterman and Mattson suggest that, in our current era, liberalism has “pledged itself to rationality in a political culture in which anti-intellectualism runs rampant,” and in which the enemies of liberalism are effectively mobilizing populist fear and ignorance. Though the book loses narrative focus due to the slew of mini-biographies spliced throughout, it remains an illuminating history of postwar politics, international relations, culture, and philosophy—all in one scrupulously researched volume. Agent: Tina Bennett, Janklow & Nesbit. (Apr.)
close
Details