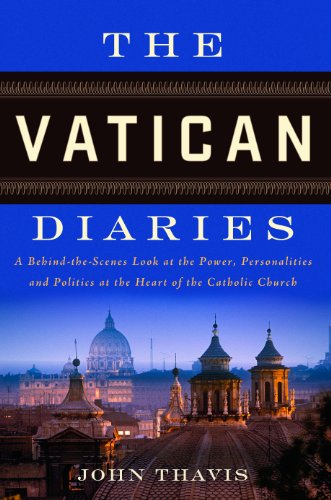 The Vatican Diaries: A Behind-the-Scenes Look at the Power, Personalities, and Politics at the Heart of the Catholic Church

"I'm convinced that the backstage reality at the Vatican is infinitely more interesting than the caricature of power and authority that dominates the mainstream media," writes Thavis, former Rome bureau chief at the Catholic News Service. His entertaining and readable book proves his point. Focusing on the reigns of John Paul II and Benedict XVI (neither of whom come off well here), Thavis reveals a great deal about how the Vatican bumbles along. Each chapter focuses on a particular mishap, so readers are sure to be intrigued, whether by "Bones"—the story of how a priceless archeological find almost fell to the expansion of the Vatican's parking spaces—or a profile of Father Reginald Foster, the Vatican's rebellious, mouthy (and deeply gifted) chief Latinist. The controversies surrounding the sainthood of Pope Pius XII, the ultra-conservative Society of St. Pius X, and the Catholic church's struggles with birth control, AIDS, homosexuality, and celibacy are also all included, revealing just how political the Vatican really is. Given such insight, readers may wish that Thavis had provided his own perspective on if, and how, he kept his own faith while working in such an environment. (Mar.)
close
Details