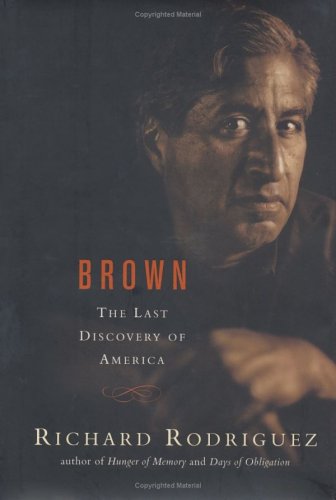 BROWN: The Last Discovery of America

"I write about race in hope of undermining the notion of race in America," notes Rodriguez () in this provocative and challenging meditation on identity, racial and otherwise, in American culture. Relishing the contradictions of his own life as a "queer Catholic Indian Spaniard at home in a temperate Chinese city in a fading blond state in a post-Protestant nation," Rodriguez uses the color "brown" as a metaphor for in-between states of being ("brown bleeds through the straight line—unstaunchable—the line separating black from white") and as a symbol of the nonlinear and the unexpected: "all paradox is brown." Beautifully written in a literary style accessible and lyrical, this book draws upon a far-reaching range of cultural figures and artifacts—e.g., Milton, James Baldwin, Ralph Waldo Emerson, Ralph Lauren advertisements, Leontyne Price in the opera , Edith Sitwell, , Carlos Fuentes, Francis Parkman's —to make his case that our historical and contemporary conceptualization of race is rudimentary and psychologically and culturally damaging. He isn't afraid to challenge recent left orthodoxy, finding, for example, that he "trusted white literature, because I was able to attribute universality to white literature, because it did not seem to be written for me." This book is written for anyone looking for a way out of limiting self-conceptions.