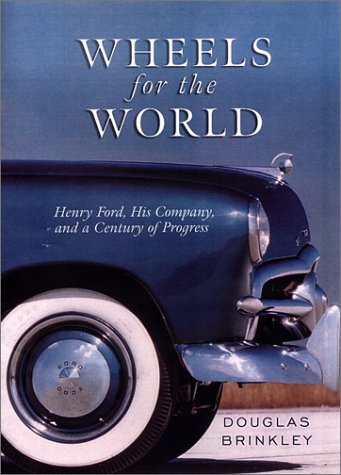 WHEELS FOR THE WORLD: Henry Ford, His Company and a Century of Progress

Two other histories of Ford are slated for publication this year; four were published last year. Brinkley, a University of New Orleans history professor, distinguishes his as the only "single volume business and social history of Ford Motor from 1903 to 2003." In fact, it's something different: a book about the people of Ford, including the Ford family, executives, workers, union organizers and others. Extensive new documentary materials tell Ford's story in the words of its people. Brinkley's focus never strays far from Ford plants in Highland Park, River Rouge and Willow Run, Mich., yet he reflects events taking place in the outside world through the actions and feelings of people in nearby Dearborn, Mich. This does for 20th-century history what did for the prior era: relate world events from a fixed perspective on a human scale. For example, Brinkley infuses a discussion of Ford's design shift in the late 1950s with Henry Ford II's scandalous (for the time) pursuit of his European mistress. And he mentions the Korean War because it led to government-imposed production controls that prevented Ford from surpassing Chrysler in sales. Readers interested in the history of the Ford Motor Company can find accounts better-written (Robert Lacey's ) and more authoritative (Allan Nevins's ), but will value this book for its new details and quotes. For general readers, it's a fascinating epic saga of ordinary and extraordinary people who built a great company.