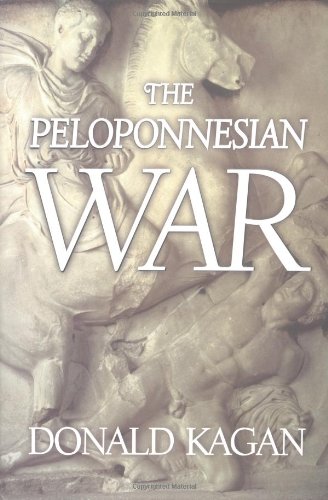 Beginning in 1978, Kagan's publication of the four-volume established him as the leading authority on that seminal period in Greek history. Despite its accessible writing style, however, the work's formidable length tended to restrict its audience to the academic community. This single volume, based on the original's scholarship but incorporating significant new dimensions, is intended for the educated general reader. Kagan, a chaired professor of classics and history at Yale, describes his intention to offer both intellectual pleasure and a source of the wisdom so many have sought by studying this war. On both aims he succeeds admirably. The war between the Athenian Empire and the Spartan Alliance, fought in the last half of the 5th century B.C., was tragedy. Fifty years earlier, the united Greek states had defeated the Persian Empire and inaugurated an era of growth and achievement seldom matched and never surpassed. The Peloponnesian War, however, inaugurated a period of brutality and destruction unprecedented in the Greek world. Like the Great War in 1914–1918, participants recognized even while the fighting went on that things were changing utterly. The contemporary history written by Thucydides is the best source for this complex story, but not the only one, and much of the value of this work lies in Kagan's brilliant contextualization of his ancient predecessor's work. The volume's ultimate worth, however, lies in the perceptive, magisterial judgment Kagan brings to his account of the war that ended the glory that was ancient Greece. Kagan gives us neither heroes and villains nor victors and victims. What infuses his pages is above all a sense of agency: men making and implementing decisions that seemed right at the time however they ended. Such lessons will not be lost on contemporary readers, who can discuss them with the author on his six-city tour.