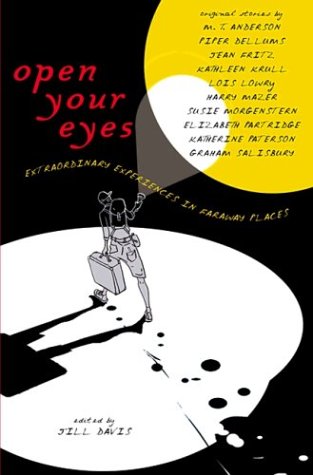 Ten notable authors recreate memorable moments of their youthful travels in this thought-provoking collection of essays, letters and stories. Some selections take place on native soil: Elizabeth Partridge's "Looking for America," for example, traces her road trip to the segregated South, and Piper Dellums, the daughter of a U.S. congressman, describes hosting a white South African girl assigned to her African-American family as part of a foreign-exchange program in 1977. Without exception, these intimate first-person narratives successfully evoke the awe, thrill or terror of experiencing a different culture. Acting bolder than her mother about exploring the streets of Tokyo in the years after WWII, an 11-year-old Lois Lowry risks entering a stranger's house and learns that kindness can exist in "enemy" territory. Taking the persona of her daughter in "Little Mom, Big French Suitcase," Susie Morgenstern shows what it's like to grow up in France with an outspoken American mother. M.T. Anderson, identified as a "nerd," goes to boarding school in England because he is "tired of who I had to be in America.... [England], I thought, is a land where eccentricity thrives.... It is a , I thought, a realm." Kathleen Krull conducts a Q&A session with her 19-year-old stepdaughter, collecting nuts-and-bolts advice on backpacking through Europe. The other members of the all-star roster here include Jean Fritz, Harry Mazer and Katherine Paterson. Ages 12-up.