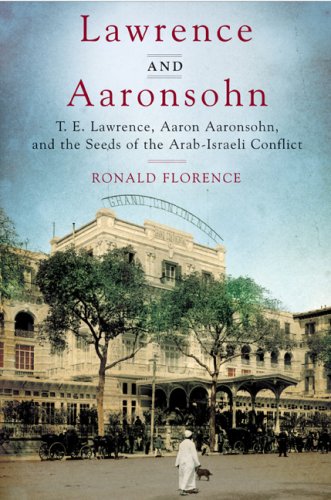 Lawrence and Aaronsohn: T.E. Lawrence, Aaron Aaronsohn, and the Seeds of the Arab-Israeli Conflict

In this dual biography of two key figures in Middle Eastern history, Florence ( ) grounds the clash of Arab and Jewish nationalisms in the Ottoman Empire’s collapse during WWI. T.E. Lawrence (“of Arabia”) was a flamboyant British officer and romantic partisan of a mythologized Arab people, who cobbled together an anti-Turkish revolt out of fractious Bedouin clans. Aaron Aaronsohn, a Palestinian Jew and an agronomist who pioneered the Zionist effort to make the desert bloom, organized a spy ring to feed intelligence on Ottoman defenses in Palestine to the British. There’s suspense and pathos in Florence’s saga of the war-torn Middle East—Aaronsohn’s sister, also a spy, was tortured by the Turks and committed suicide—along with eye-glazing diplomatic wrangling as Aaronsohn and Lawrence try to influence British policy toward conquered Ottoman lands. Florence’s portraits of his protagonists color his account of the competing political claims. His depiction of Aaronsohn makes Zionism the more authentic nation-building project, deeply rooted in the careful stewardship of a soil watered with Zionist blood, while Arab nationalism comes off as largely a shallow, alien conceit imported by an eccentric Englishman to Bedouin more interested in booty than independence. (See also reviewed on p. 44.) Photos.