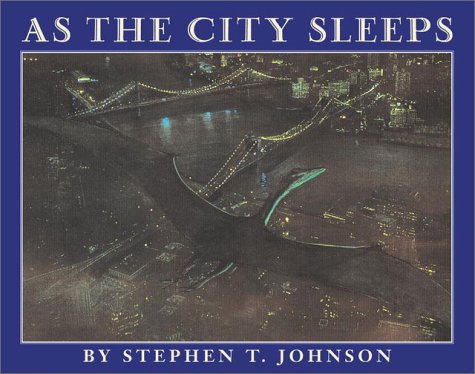 AS THE CITY SLEEPS

Johnson () takes a walk on the wild side with this eerie ramble through an urban nightscape. Setting abbreviated text to haunting paintings, he conjures a peculiar nocturnal world, first glimpsed in a scene showing barely discernible, vaguely reptilian creatures emerging from a manhole ("/ They escaped into the night," reads the headline-like caption); the last scene presents a snake slithering down another manhole in retreat ("/ Even night creatures must sleep"). Buildings loom menacingly in the fog, and nothing odd seems out of place, whether a spectral subway car carrying strangely dressed passengers ("/ Last seen in 1906, they vanished without a trace") or a pterodactyl swooping over the illuminated cable strands of a suspension bridge ("/ Without a sound, it glided over the city"). The artwork is mesmerizing. Johnson's hyper-realistic style has the look of enhanced photographs, and his palette of inky blues and murky greens adds to the unearthly atmosphere. With its enigmatic illustrations and one-line accompaniment of text to encapsulate the action, the premise is reminiscent of Van Allsburg's . Deliciously off-center, the book taps into the universal fascination with night, and although the lack of a definitive story line may prove a stumbling block to some readers, the enigmatic, hauntingly orchestrated journey will entrance others. All ages.