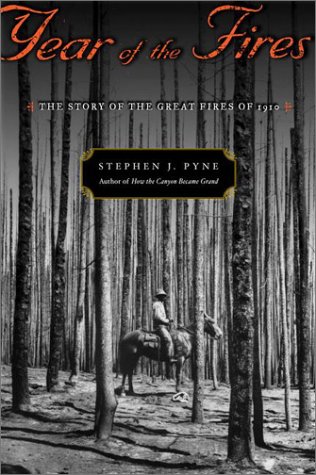 YEAR OF THE FIRES: The Story of The Great Fires Of 1910

Following last summer's wildfires and debate over "controlled burning," Pyne, author of the five-volume and the much-acclaimed , has become one of the most widely consulted experts on American fire policy. While this book's focus is on fires that raged 91 years ago in Washington, Oregon, Idaho and Montana, it addresses such perennial questions as whether there can be a "good" forest fire and the place of fire in healthy forest ecology. Fighting the 1910 Great Fires—ignited variously by lightning, abandoned campfires and "candle-sized flames sparked by railroads" cost many lives and injured hundreds. An continuing program of human-controlled "light burning" might have been better, but infighting in scientific forestry circles (compounded by political and bureaucratic sniping) silenced this minority position. Teddy Roosevelt was "bully" on conservation and his five-year-old Forest Service was devoutly antifire. Fire wasn't seen as a natural part of the forest's life cycle—it was the enemy and it had to be stopped, no matter how many lives it cost. Pyne builds his case with a dense, month-by-month chronology. At his best with a hard-luck or disaster story, he overwrites his polemic sections shamelessly, occasionally lapsing into awkward similes (firefighters crowded into a cave like "oats in a feedbag"). Maps make the fire's geography easier to follow, while the photo inset gives a period flavor to the tale.