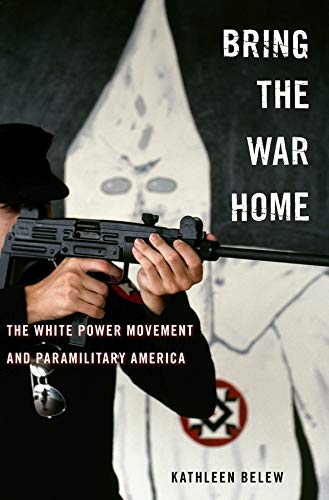 Belew, an assistant professor of history at the University of Chicago, delivers an engrossing and comprehensive history of the white power movement in America, highlighting its racism, antigovernment hostility, and terrorist tactics. This impressively researched work looks into, first, the Vietnam War’s influence on the movement’s earliest leaders, such as Vietnam veteran Louis Beam, who equated the Vietnam War with American decline and wanted to reclaim a time before civil rights, legal abortion, birth control, immigration of nonwhites, and interracial marriage. Then, Belew investigates the movement’s evolution: its call for “leaderless resistance” and war against the government in the 1980s; the growth of its militia phase that led to the Ruby Ridge standoff in Idaho, the Branch Davidians in Waco, and the 1995 Oklahoma City bombing; and its shift to online platforms in the late 1990s. She also studies the movement’s paramilitary training camps, the role of women in the movement, its push to respond in kind to the militarization of police departments, and the difficulties of prosecuting its leaders—due, in part, to its strategy of decentralization and the groundswell of support for militias in the mid-1990s. Belew presents a convincing case that white power rhetoric and activism continue to influence mainstream U.S. politics. [em](Apr.) [/em]
close
Details