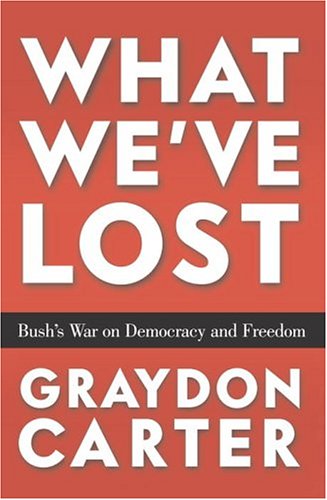 WHAT WE'VE LOST: Bush's War on Democracy and Freedom

No quarter is given in editor Carter's furious, comprehensive indictment of the Bush administration. Dispensing with satire and mind-of-Bush psychoanalysis, Carter and his researchers sum up a now-familiar anti-Bush case mainly through a relentless buildup of often bullet-pointed facts, including many thematic litanies of Bush policies, a list of American soldiers killed in Iraq and a debunking of the 2004 State of the Union address. A sprinkling of choice quotes highlights what come across as broken promises, cynical deceptions and presidential inanity ("It's clearly a budget. It's got lots of numbers in it") that Carter uses to sum up the administration. He condemns the shortage of biochemical warfare suits for American soldiers in Iraq, even though he believes Iraq had no biological or chemical weapons, and he blames Bush both for soaring trade deficits and for protectionist measures. Carter's voice comes through this blunt marshalling of facts and figures; people will be listening.