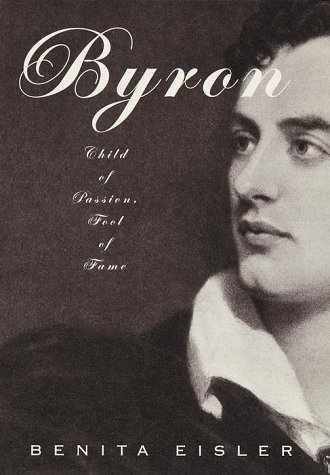 On May 17, 1824, one month after George Gordon Lord Byron (b. 1788) caught fever in a Missolonghi rainstorm while fighting for the liberation of Greece, the cautious publisher John Murray, with the blessing of Byron's ex-wife, Annabella, and his beloved half-sister, Augusta, took a match to an unpublished work by the famous poet--the two-volume manuscript that was his memoirs. Perhaps it was this act that opened the flue for Byron biography, for as more and more of the seamy details of the poet's highly dissolute life come to light, the abiding hope remains that the destroyed work contained still more. Eisler's (O'Keeffe and Stieglitz: An American Romance) exhaustive biography portrays Byron as a restless, brilliant man in thrall: he is, in her view, the puppet of his own extravagant passions and even in his lifetime was so fictionalized and mythologized by others that he found it hard to maintain his own sense of self. Whereas Phyllis Grosskurth's study of two years ago, Byron: The Flawed Angel, used psychoanalytic arguments to show the poet's state of mind and possible manic depression, Eisler is more interested in the interaction between his amorous attachments and his poems. She quotes from his oeuvre liberally and with the good timing of an able literary critic, as she details the romances of the great Romantic, from his childhood crushes, through secret schoolboy encounters, affairs with other men and with the society belles and salonistes like the Ladies Oxford and Lamb, his marriage to Annabella, his incest with Augusta, dalliances with countless other women he would ultimately spurn, and his final, protracted involvement with Teresa Guiccioli. There are moments when Eisler's tight rein on her prose slackens to clich , as when, having described so many of the beauties Byron bedded, Teresa is given the proverbial ""little white teeth like perfectly matched pearls."" But in the main, Eisler's lusty enjoyment of her subject's many escapades animates the story she tells in words both elegant and provocative. The mind-boggling array of quotations, excerpts, and eyewitness and historical accounts she has amassed give face and flesh not only to the poet born under a bad, bright star, but to those whose lives he illuminated briefly. (Apr.)
close
Details